We don’t know if you have watched The Channel 4 TV show ‘Lodgers for Codgers’ which was launched recently and is an experiment based loosely on Homeshare.

taken by Bake Off: an extra slice! 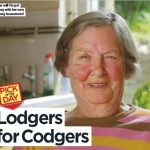 ‘Lodgers for Codgers’ is not unpleasant viewing and does provide the occasional heart-warming moments, but it has a lot of drama with the unsuitable matches! It has raised some awareness of Homeshare but, as a way of trying to promote a new way of living by pushing virtual strangers together for just five days, it misses the point somewhat. ‘Real’ Homeshare delivers so much more than this.

What this ‘experimental’ TV show has done, is raise yet again the issue of care and loneliness among older people and younger people struggling to find suitable housing.

Homeshare UK have produced a blog which examines ‘Lodgers for Codgers’ autopsy: can Homeshare help out the housing crisis?