82-year-old Oxfordshire-based Jennifer Baird was diagnosed with dementia in May 2014. She had a Sharer, Judith O’Boyle, through Share & Care Homeshare, who lived with her from October 2016 until September 2017. Jennifer’s daughter Jo Evans says; “I wish I had known about Share & Care before, much sooner in mum diagnosis. Having a Sharer was a very welcome solution for that year of mum’s life.”

Jo explained; “She was 79 years old when first diagnosed, but we had seen her getting more forgetful and took out a Power of Attorney in 2011. Gradually we started to organise the running of her house and her life and appointments more and more; at the same time I was still running my own home, working and looking after my own children. In 2013 she had a memory test, but it was only seen to be mild cognitive impairment. We felt it was much more than that and requested another test. While we were waiting for this she had a gastric illness and a suspected stroke and it was at this time she had another scan which showed the dementia. Her life, quite slowly initially, started to get smaller and more limited. After a few years she had to stop driving so her independence decreased, and she did not always remember arrangements she had made to meet people, so she grew increasingly isolated. She was also finding everyday tasks, such as shopping and washing clothes, difficult. After her diagnosis the council arranged for carers to come in twice a day, but she certainly didn’t feel like she needed carers; that wasn’t really the sort of help she needed – she actually needed a little practical help and most of all, companionship. 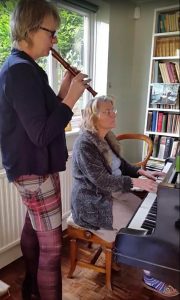 “My mum is a trained classical singer. She studied singing and piano at the Royal Academy of Music, and performed in many concerts as a founder member of the Monteverdi Choir. She was very much involved in the music scene locally, and was head of music at a prep school, and then head of singing at a girls’ boarding school. Consequently her home has always been filled with music, whether it be impromptu musical gatherings, teaching at home, or rehearsals for upcoming performances with groups of singers. Even after her diagnosis she still played the piano, though more limited, and continued to enjoy a sing-song at the piano. She is very intellectual and well read, and has always enjoyed doing crosswords and Sudoku (though as her dementia progressed, her ability to do this became more limited). She loves watching TV, usually historical TV programmes and documentaries. She enjoys short walks, although would get confused as to where she lived as her dementia progressed.”

Jo approached Share & Care Homeshare because she believed that having a Sharer present would enable her mum to stay in her home for longer. “We didn’t feel that she was ready to go into a care home, although her memory was failing her and her care needs had increased over time. She was less independent, and no longer liked being on her own, but we aren’t able to be with her all the time. She loves company! Although she had carers popping in, a weekly visit from a home hairdresser, and friends who would visit during the week, we felt that having a Sharer there would make up for the times when we were unable to be there, and that this would make such a positive difference to her (and to us). We were also relieved to know that with someone living with her, she wouldn’t feel so isolated and lonely. Another bonus was that a Sharer could feed her cat, meaning she could spend a few days away at her partner’s house.

“When mum got her diagnosis we were invited to take part in a drug research trial, and that helped her. During the trial I got to know the specialist nurses and research nurses and discussed with them how mum needed, and would benefit from, company in the evening; they recommended Share & Care. I remember that this recommendation came when I was meant to be going on holiday. I managed to find some help while I was away but it got me thinking about the possible options; to sell the house, or to try Share & Care. I thought I would have to make a lot of adjustments to my mum’s house, but all I actually needed to do was clear the room and then Judith came along. It was serendipity.”

Tell us about your mum’s Sharer

“Judith is a teacher. I felt Judith was the right person for mum, and that she had been very carefully chosen and it had been carefully thought out. I am so grateful for what Share & Care do and how they do it. The way Judith was presented to us was very accurate and she very quickly became part of the house and took over the running of the house, and mum’s diary, which was a real relief for me on a day-to-day basis. I was reassured by the way Judith and my mum built up a relationship. Judith was very artistic and bought some paints and they would do painting together. Judith also played the recorder and she and my mum could really share the music together. Judith is very get-up-and-go, and would say ‘let’s try this’. She was really very proactive and would take mum out to local museums and cafés. And then there was sharing meals with mum – and if I was there too we would take turns in cooking and chat about our lives.”

How did the finances work?

“When she was diagnosed with dementia, mum was financially assessed and she was deemed to have to pay a certain amount – capped at £114 a week – towards whatever care she needed. At the time Judith moved in, we had had to step up the care (originally two short visits a day) adding in evening and weekend visits, and this meant that the council was having to fund an extra £60 per week.

“When Judith came we were able to reduce the evening visits and weekend visits, which drastically reduced the amount the council was having to pay towards mum’s care. Initially mum was paying Share & Care’s agency fee – just £120 per month because of where mum lives. However, I approached mum’s council to ask if Share & Care could be included in mum’s care plan. The council absorbed it into mum’s cap as they realised that the other care visits had been reduced as a result of Judith’s placement so it was saving them money. The council ended up paying less than they had when mum just had the evening half hour visits, and yet mum was getting so much more time and support from having Judith living with her. The council told me; ‘it is such an ethical programme and that it should be rolled out in councils across the country’.

“Mum thrived under the arrangement and we feel was in better health physically and mentally than she would have been without it. I would say, as best I can, that a 15-20 minute visit from a carer, however nice they are, doesn’t give that cognitive stimulation that having a Sharer can give.”

Judith moved out earlier this month (September 2017). Mum’s dementia had declined and we are now looking at Residential care homes for her. Jo adds: “Share & Care gave us a year’s grace, and gave mum an extra year in her own home. I always felt so supported by the way Share & Care kept in contact, and with all their advice.”

We also caught up with Jennifer’s Sharer, Judith O’Boyle

“I came from the background of having been a nanny and I was looking for a place to live. I had no knowledge of Share & Care Homeshare and then I saw this, and having been in a role of nanny and mother, I thought it would be ideal. There was monetary consideration obviously too, it would save me money. I wanted to find out about it.

“On meeting Jennifer I thought, ‘this would work’. Yes she has Alzheimer’s but she is a lovely person who has had a wonderful life, and we got on well. Our shared love of music was an important factor in our relationship. Share & Care picked up on that shared interest. It is important to have something that connects people. If she was getting anxious I could change the whole atmosphere by putting on music. 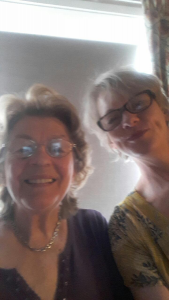 “Homesharing was a huge learning curve for me and in hindsight I took on perhaps too much as I was doing a job and my studies, and I wanted to cook a proper meal each evening. Cooking was important as it was something we were doing together. She always wanted to help and it was important that I let her help. I did the cooking, and she did the cutlery; she loved to order the cutlery.

“The challenges were if she and I were tired, just like normal people, and I would get the same questions again and again and that was challenging. You have to watch out for those times and learn to recognise them. We would both go to bed at 9pm, which was fine by me.

“I would say I could homeshare again, but not while I am studying too. I could combine homesharing with a job, but not job and studies.

“I because very close to Jennifer, and to the family, and I felt guilty leaving, but it was time to move on. I got a lot out of Sharing with her. My self-confidence rose while I was there. And I got on well with Jennifer; she was so sweet with me and would pick up on if I needed a hug. She might not remember my name – she never got to grips with my name nor that I lived there – she would ask if I was going to stay the night and she would be relieved that I was staying. She may be forgetful and with Alzheimer’s, but she was still very intuitive and loving.”

Let us know if you liked the post. That’s the only way we can improve.

This site uses Akismet to reduce spam. Learn how your comment data is processed.